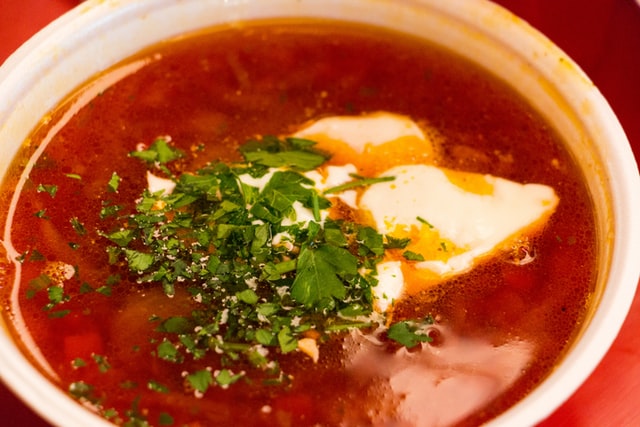 The greatest mystery with this nice soup is the English spelling and pronunciation. It is much like the mystery of why we call the capital of Russia, Moscow, when it is москва (Moskva). Supposedly, this soup originated in Ukraine but is also associated with Russia. I guess that is not a surprise. Why does it end in a ‘t’? Who knows? The letter ‘щ’ confounds and frustrates me more than the rest of their alphabet combined.

This is a beef version, which as far as I can tell is the classic Borscht. There are other styles with chicken and whatnot. There are no difficult-to-find ingredients. I am finding that traditional Russian recipes have very basic and common ingredients. That is a good thing! Especially after driving all over creation to find traditional Thai and Chinese ingredients.

The beef stock can be a commercial preparation. Making it is better, so you know it is not overloaded with salt and preservatives. From what I have seen, it is served with dark rye bread. Gross! Here is a lighter, Russian bread recipe. As noted, it is very similar to Italian bread and that is not a bad thing. Here is a no-knead crusty bread recipe.

This would be good in a pressure cooker, but this recipe is a normal stovetop one.

I will post about the difference between stock and broth and some recipes, at some point™.

It has a lot of ingredients but is not difficult to make. It does make a lot. I can fill up a large dutch oven. It is good over multiple days.

It is good, next time I make it I will go a little off this script and see if I can improve it and report back.

If you can’t find tri-tip, look for sirloin that is marbled somewhat. Tri-tip is basically very well-marbled sirloin.

It might not be a bad idea to change the ratio of broth/water a bit higher than 1/1. Like 5 c broth to 3 c water, or even higher.

The sour cream is not necessary in my opinion. In most recipes, sour cream is bland calories and adds nothing in my overly picky opinion. Supposedly, it is traditional so when in Kyiv.

It is easier if you cut all the meat and vegetables beforehand. If you want to do it hours before, cover and refrigerate, keeping in mind that different veggies go in at different times. For the potatoes, cover with cold water and stir in a tbsp or two of lemon juice and refrigerate to keep it from browning.

You might have noticed that I didn’t include salt. I use reduced sodium broth, or make a low-salt broth myself. At any point, if you think it needs more salt, that is a good place to add some.

I am not sure what it is about making Slavic food, but it seems that I always nearly chop off a finger. It is amazing that I have any fingers left.

This is the best Ukrainian band ever. Okay, it is the only Ukrainian band that I know, but they are supremely talented. It is a shame that they are not bigger than they are. I know of a few bands from Slavic countries and Jinjer is the best, even though the others are good as well. Everyone gushes over Tatiana, who is a very good singer, but the entire band is just as creative and talented. The type of music is generally called metalcore, but that is too limiting for a band that works in other genres such as reggae and jazz. Kind of like a metal version of The Clash, at least in some ways. Progressive metalcore? I was supposed to go see them last week, but 2022 is another terrible year, and they certainly have more important things to worry about.