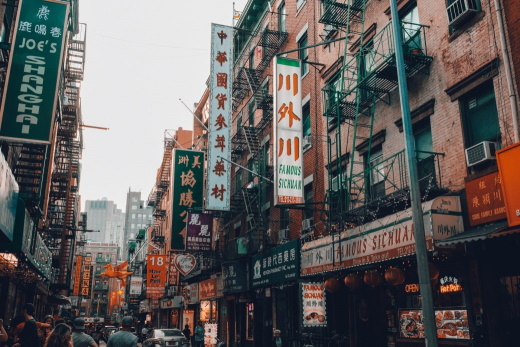 Named after a Chinese general. Supposedly, there were two with that name from different eras. Which one is under some dispute, it seems.

This dish was created in New York City in the 1970’s by Chinese chefs. Which one? It seems to be under some dispute.

Regardless of the truth, this is arguably the king of fake Chinese food. Inspired by Americans’ not very refined palates. Like Orange Chicken, some recipes you will find have a metric ton of sugar. That is not good. This one uses a bit of honey for a sweetener, but I don’t feel that it is a lot, especially compared to the 1/2 cup to cup of sugar you might find elsewhere.

If you are going to fry it with the coating, cubed works best.

If you don't want to coat the chicken, put a little sesame oil in a wok and heat over medium and add the garlic and onion until it is fragrant.
Add the chicken and cook until it is done, towards the end, add the chilis and stir for a minute or so.

This makes enough for 4-6 people, possibly more. The sauce is just enough to coat the chicken without drowning it. If you want more sauce, just double it or whatever.

If you are going to use the coating, to deep-fry use an oil that has a high smoke point. I prefer peanut oil (not all types of peanut oil can withstand high heat) or grape seed. Standard vegetable oil should work.

Make sure you don’t heat the oil too quickly, on my stove medium works fine to heat it up, and then I turn it down just slightly. Be cautious, deep-frying can be dangerous.

Chinese rice wine is often called Shaoxing. It breaks my rule of not using wine prepared for cooking, but there doesn’t seem to be alternatives. It is a dark liquid. Generally, this has to be purchased at an Asian store or online.

Dark soy sauce is very syrupy, not much salt and tastes like weak molasses. I have only seen it online or in Asian stores.

Hoisin sauce is very often found in normal grocery stores. I am working on a recipe for it.

If you don’t have honey, sugar is a substitute.

This is good served with jasmine rice, sticky rice, fried rice and a cucumber salad, or a hotter one.