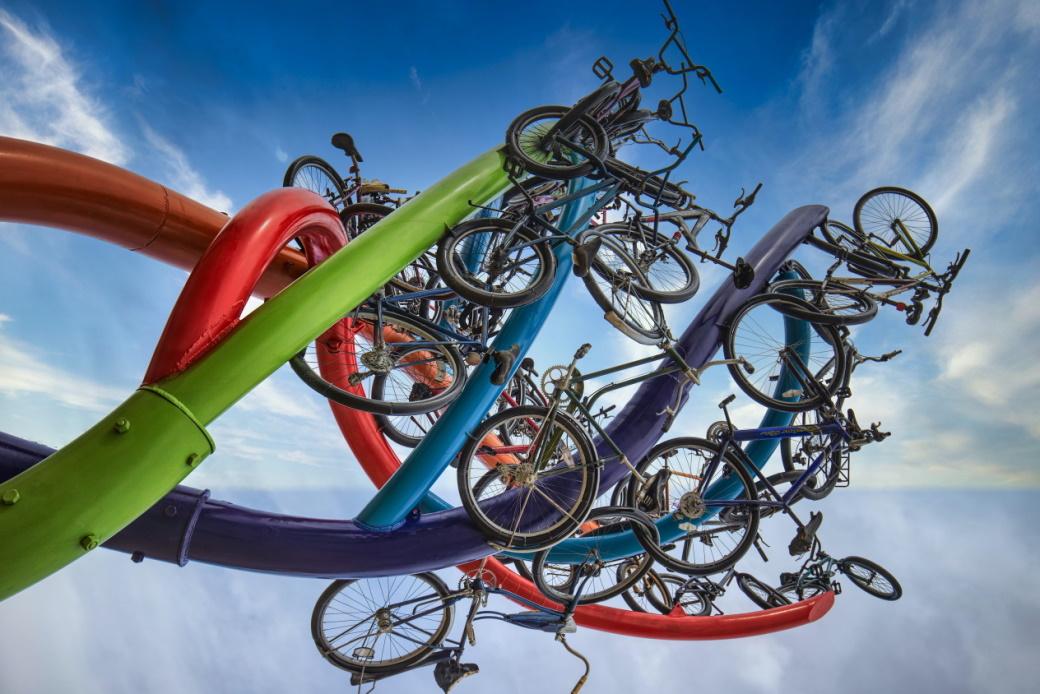 All of old. Nothing else ever. Ever tried. Ever failed. No matter. Try again. Fail again. Fail better.

And fail, I shall.

I am not sure that I could fail any better, since I am at the maximum levels of fail.

At least I keep trying. Right? Or is that insanity?

I wasn’t even feeling happy or anything else that the universe uses as an excuse to knock me down.

I guess it was my inexperience and bad luck.

I wrote a while ago about buying clipless pedals for my bike. I still like them. I love that all of my energy goes into the pedals. It is so much better than some of it going to help keep my feet on them.

Now, I am a bit afraid of them. The first video in the last post recommended that beginners take both of their feet out of the pedals. I thought I was feeling comfortable and started just releasing my right foot. The problem is my driveway. I usually go up to the top and stop. It is flatter so pulling one foot out isn’t an issue. I stopped a bit up the slope and was at an angle. The bike stopped and tilted to the left, and I didn’t get my foot out in time.

My elbow smashed into the concrete. I didn’t break anything, not even my newly repaired collarbone. Yay!

Even better news, when I hit the concrete, my left foot popped out of the pedals. At least I know I am not likely to break my legs the next time I crash. I really hate that I obsess over the crash. My entire life, it was never a thought. I have never crashed or came close to it before last fall’s little incident.

Maybe I am being too cautious?

I am not sure what is wrong, but something is. This happened about a month ago. I have ridden 5 times since then. Of course, my elbow hurt a lot, but my forearm is the worst pain. Oddly, the pain moved around my forearm for a few weeks. Now it just stays near my wrist. Twisting my arm is very painful, but I can move my hand up and down. I guess it is a ligament issue?

A week after the fall, I tried to ride. With the clipless pedals in. Bad move. I was still getting over the crash last fall and got so anxious, even on easy curves, that I would slow way down. I should have waited to put on the pedals until I got comfortable again.

It was nerve-wracking riding again with the pedals. I went through the curve the wiped me out last fall. I hit a pretty good bump in the trail a little after the Curve of Doom. It felt like my forearm shattered. I barely got my feet out and stopped before leaning over in massive pain. I rode the 6 miles back home, slowly, with one hand on the handlebars.

Of course, this has made my sleep very poor. Well, poor for me. A normal human would call it devastating. I got a stiff wrist brace with built-in compression, which helped a bit.

Apparently, my oldest daughter inherited her bad knees from me. She tried something called KT tape. She said it helped her. I was skeptical, but if it helps a little, it is worth it. About two weeks ago, I got a roll, found a video on how to use it for my wrist. It is difficult doing it one-handed, but it works.

I guess it is true that I need a nurse, not a wife.

Instantly, my arm feels much better. Still hurts, but I can twist it much further without pain. That was weird but a good thing. I will try it on my knees and maybe my feet and see if it cuts down on pain.

So, last week, I go out for about 10 miles. I do okay. It hurts but doesn’t feel like it is shattering. I wait another week and test by riding around the neighborhood.

Last week, it was about 53F in the middle of the day. This week it is in the mid-nineties. That is July weather here, and I am not acclimated to it yet. It was an extremely difficult ride, even without the sore wrist. I am not in great shape right now. At least I finished the 15 miles, but it felt like heatstroke. Of course, it didn’t help that I went out when it was hottest, and I forgot to eat lunch. That is a thing with me. I forget to eat but remember when I figuratively crash into a wall.

Forget a nurse. Maybe I need a wrangler.

15 miles is too much with the weather, and I am basically starting over. The good news is that I don’t get anxious about curves anymore. It seems that I have gotten my confidence back. The clipless pedals make me very nervous when I need to slow down or stop. On my 15 mile ride, I noped out of the hill that is 22% grade. Between not eating and the weather, it felt like it might trigger a heart attack. I had gone up it before my minor accident, so it is not like I can’t do it. That means to get off the trail, I have to go through a narrow space with a metal barrier on both sides. It is a small dirt incline with rocks. I got nervous and barely got one foot out before stopping. I usually can go up it on my road bike without issue. But anxiety attack and all of that.

I was close enough to the barrier that I was able to grab it with my right hand. I did not crash again.

I guess the point is that I have not used them enough where it is second nature to get in and out. Actually, getting in is very easy now. I can even do it on inclines. I have the clips that have more give. It is nice because I can shift my feet quite a bit to relieve knee pain. Some clips have less give. I feel that those would be easier to get out of. Once I become confident with them, I may try out different clips. These were recommended for beginners because it is easier to put them on the shoes correctly.

I rode just 10 miles today, leaving an hour before sunset, so it wouldn’t be so hot. It felt more normal and finished it in a decent time. Faster than I have all year. I took the wrong course for my wrist. The trail going east has many cracks in it, and it started to hurt my wrist. Still, no problems on curves, and I do okay getting out of the pedals. I even took a somewhat tight curve, going downhill, at about 25 mph without any anxiety.

I am left to wonder how I approach the clipless pedals. Part of me wants to start over and go to the park and practice all day on the grass for a few days.

It might not be the worst idea in the world.

Part of me wants to take them off and put on my flat pedals until I am very confident riding again and am back into decent shape.

That might not be the worse idea in the world either.

I know I still want to use them.

If I rode a lot in traffic, I would not use them for that. If I take a course that is mainly on the streets, they are coming off. The issue is that some of my longer courses have a fair amount of distance on very busy roads. I really want to see how much better the clipless pedals are in long rides. If the weather is cooler next week and my wrist is still improving, I want to go on my 35-mile route. Five miles of it is on a busy road, but there are only two places I need to stop. That might be okay. Halfway into the ride, it goes into an extremely busy park downtown. That makes me nervous.

Maybe I will do that with flat pedals once or twice before attempting with my awesome pedals.

I know half of my routes are closed until my wrist is completely healed. Going on a long ride to the east would be extremely painful.

So, should non-professionals like me even have these pedals? I think so but are not critical. They really do help a lot. The downside is that they add more things to think about until they become second nature. It is not that I can go faster, it is that I can expend less effort than with flat pedals. Somehow I make it up steep hills easier, yet I feel like I had an even better workout than I did on flat pedals.

If you ride casually, nope. Don’t even think about it.

Professionals make it look so easy. I wouldn’t call it easy but it really is not that hard after a bit of practice.

Not really, just don’t be like me and add them to the mix when you are getting over a crash. Don’t try them if you are just starting out.

If I had bought them a year ago, it would have gone better since I had no anxiety while riding. Even the crash wouldn’t have made it harder to get back into the pedals. They wouldn’t have been a factor in my crash. I doubt that they could have prevented it.

I am starting to feel better about my bike, and that is good news. My shoulder is not yet 100% but is good enough, and there have been no signs of bursitus. There have been no major seizure issues so far this year. It has been just the typical minor seizure issues, with one or two moderate seizure problems. That is not great but won’t impact my ability to ride, so I don’t care.

Maybe this will be my only injury or setback this year?

How is that for some unreasonable optimism?