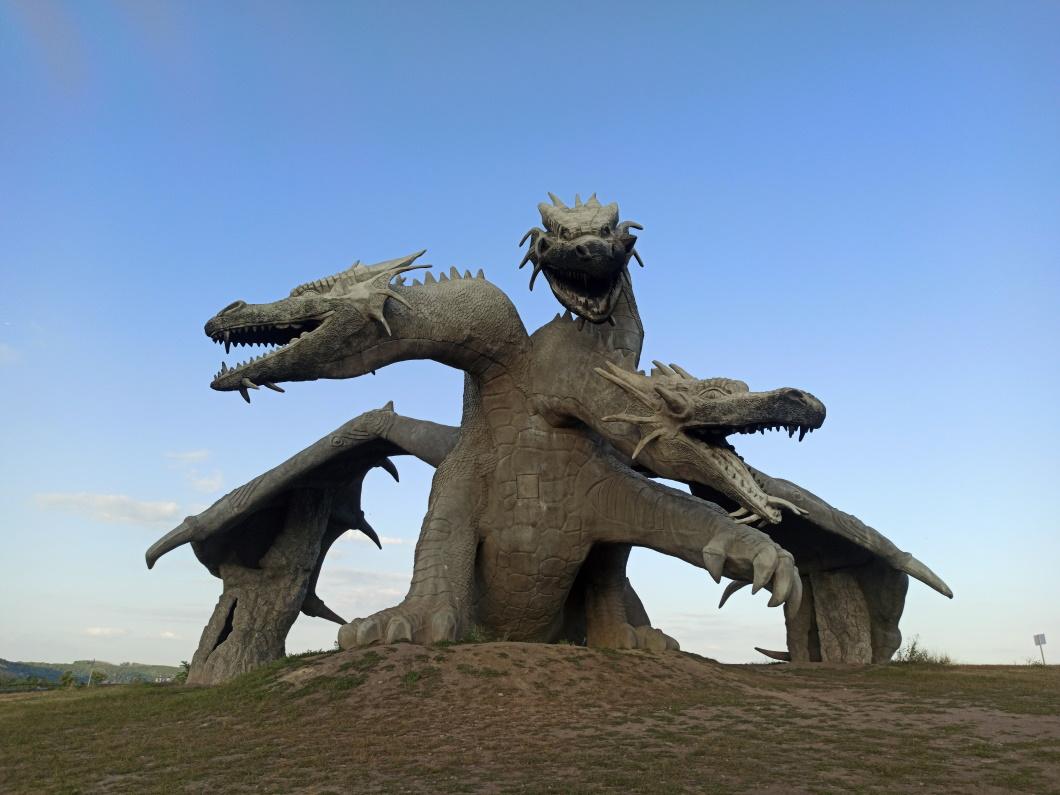 To the Delight of a Dragon

The dragon is not used to having any of his dreams come true. They come close, and regardless of how hard the dragon works, in the end, something always goes terribly wrong. This is not his ultimate dream, but it is a major step closer to it, and he knows it still could go awry. This dream is far and beyond anything that he ever thought possible.

The princess consented to visit the dragon for nearly two weeks for a vacation in his lair. Fate tried to intervene against these plans, over and over, and it even made a weak attempt just hours before arrival, but the princess arrived safely.

Upon seeing the princess for the first time in person, he raced to her and hugged her. He instantly has greedy thoughts of never letting go. It was the most exciting and scary moment in his long life. She even seemed very happy to see him and hugged the dragon even harder.

After some time passed, it felt like both seconds and hours, they started walking hand in hand to begin the short trip to his lair. On the way, they would nervously talk, and to relax, he would point out various things as they passed them. When they arrived, he welcomed her into her new home. After she got cleaned up, they held each other for a very long time, like they had both been alone for their entire lives.

The next day was a day of rest for her after traveling halfway around the world. Lots of hugging and talking, and the dragon cooked for her for the first time, and she helped. It was amazing, and it made the dragon feel normal after decades of doing these sorts of things alone. That night was the first of many movie nights. Unlike many princesses, our lovely princess picked mostly action and superhero movies. Funnily enough, the movies the dragon had picked had more romance in them, although they were not romances. Their taste in movies was pretty much identical, which delighted the dragon.

As we all know, agreement over movies(and music) is probably the most important predictor in a relationship working. Well, not really, but the dragon was grasping at any and all things that made them both happy.

It was agreed beforehand that there would be no schedule of activities. There was only a nonspecific list of possible things they could do as they felt like it. The main goal of this trip was for the princess to have a relaxing vacation and for them to find out how well they do together.

The only exception was that the second day the dragon had several medical appointments. She wanted to come with him to see what it was like and help keep the dragon calm. Even before this, the dragon knew that he wanted to have the princess forever, but this day is when he absolutely knew it for truth. During one of the appointments, a type that makes the dragon very nervous, she sat near and held his hand. It was even noted in the medical records that she did that to help his anxiety over the procedure. It was the kindest, sweetest, and most loving thing that the dragon had ever experienced.

The dragon has had relationships before, but they were not princesses but were hunters of dragons pretending to be princesses. This was the first time he had ever felt true love.

With the appointments over, the dragon took the princess to a nearby mall. She was curious how different they are. They were not.

Despite loving to shop, she fought the considerable urge to look at shoes and dresses. It was so adorable, and the dragon hopes to be able to take her shopping for real, one day. She is so fun to shop with. Even a male dragon that has no patience for it would never tire of shopping with this princess. He also took her to a Thai restaurant, something she had not tried before. One interesting thing is how shocked she was at the size of her meal. She said it was 3-4 times what they get in her lands. It says a lot about the dragon’s lands and nothing very good. It is worth delving into in a future article. That night was another wonderful movie night that Princess Irina did not make it through. The dragon does not think she made it through any of the movie nights without falling asleep. That was fine with the dragon because he would hold her and rub her back during the entire movie. He does not think the princess minded it either.

With all the scheduled activities over, the fun really started. The next day was probably the most fun and exciting for the dragon. They went to a very nice beach and park, and he got to swim with the beautiful princess. He was also was able to put suntan lotion on the easily burnt princess, another first in the dragon’s life. He knows it is a little lame to get so happy over small things, but small things are important.

The days went like that for the most part. Every day was perfect and wonderful for the dragon.

The princess seemed very happy, content, and relaxed. That was the most important thing.

She enjoyed the lands around the dragon and seemed to enjoy the dragon’s company. Even his lair was acceptable. He would have to do some work to accommodate the princess’s shoes if she decided to make it her permanent home. The dragon had heard rumors that extensive shoe collections and princesses go together like quinoa and chickpeas, and indeed it is true.

They rode bicycles, which was fun. It was the first time in a very long time that the princess had ridden a bike, so it was a little funny. She forgot the brakes once and ran into her dragon, and she was frightened that she hurt him. Dragons are not easily hurt physically. Don’t tell her, but he was a little glad that she did because they stood on the side of the bike trail. He was able to hold her while she rubbed his back which he loved so much. Of course, she would probably have done it without hitting him, but anything that gets her closer is okay with him. He was also thrilled that she showed genuine concern for him when she thought he might have gotten injured.

The dragon was scared that he would be so nervous during her visit that it would not be enjoyable for either of them. After some initial nervousness and awkwardness, he was the normal dragon he had always shown her over their long-distance communication.

One day that did scare the dragon was when he woke and was so anxious and feeling seizure-y. This makes it difficult to get out of bed or do anything but sleep and wake a lot. He could not get up until 4 in the afternoon that day which frightened him. Not because it happened, that occurs every so often and is used to it, but the princess is not. He was afraid it would scare her, and it did but didn’t scare her away. The dragon still feels bad about this day. Staying in and cuddling is not a bad day, but he never wants to make the princess worry about him.

After that day, they went back to more fun and games. They also worked in the dragon’s yard, which was fun for him having a partner to help. He is accustomed to doing everything alone, and it was so nice for him to feel normal. He wondered if how he felt during her stay was like what normal people feel every day.

Towards the end of the visit, the princess started to get sad about leaving. The dragon was not happy about it either. She could legally stay much longer but had work and her subjects to get back to. The dragon thought very seriously of acting like a dragon and stealing her forever.

She even had positive comments on such a plan.

The dragon knew that if he did that, and she regretted being with him after a month or two, she would have lost everything in her kingdom, and that is simply not cautious and reasonable.

Still, the dragon wishes she was still here. He would give everything for just one more day with her.

He fell asleep the last night that she was here, and he bitterly regrets it. He only slept a few hours, but that was too much time to lose. Taking her to the airport was the hardest thing he had ever had to do in his life. He did not hold her as much as he wanted because it was hard for her and he was afraid of falling apart in front of her. He stayed near the security line until he could not see her and stayed at the airport until the plane took off.

Going back to his lair was the loneliest he had ever felt in his life, and remember, he measures time in being alone in decades. He kept moving his claw over to where she used to be, thinking she was still there. It went like that for a little while. As time passes, he remembers the happiness of being with her much more than the loneliness.

Discussions of future visits and possible marriage keep the dragon going. Yes, he fears that his most important and only remaining dream will shatter like all the others. There are no guarantees about anything about the future except that he has finally found his best friend and soulmate. He has searched for her for many decades. The odds of a sad and lonely dragon ever finding a soulmate are very low. When considering that she lives on the opposite side of the earth, they change to astronomical. So any future, even if it is online chatting, is a better future than what he would have had, had he not have met her.

In a way, his dream finally has come true but, that dream might get even better.